The P6 PolyMixTM (P6) patented system solves an age-old problem that has been inherent with all dewatering systems. Mixing of suspended solids and polymer has been the weak link in the dewatering process. Thoroughly mixing of the polymer with the suspended solids in the slurry/sludge is required for optimal dewatering. The P6 PolyMix™ system solves the problem of inadequate mixing while saving polymer costs 25% to 50% and increasing cake solids 10% to 50%.

Polymer is a long chain molecule that needs to be “activated” by uncoiling the long chain molecules to allow more electrically charged spaces to attract the opposite charged suspended solids (SS). The solids and polymer chains are trapped on the porous dewatering belts as the water separates from the solids. The concentrated polymer chains are unwound by the dilute neat process and injected into the slurry fluid. However, the normal long polymer chain is mechanically sheared/broken by the turbulent mixer valve or mixer paddles into shorter chain molecules in an attempt to thoroughly mix the suspended solids with the electrically charged polymer chains. If long “unbroken” polymer chains can be maintained with thorough mixing of the suspended particles, less polymer is required to achieve equal dewatering and the longer chain polymers with attached sludge solids are easier to dewater resulting in higher cake solids for a given amount of polymer used.

The P6 PolyMix™ system uses our ActiMix™ engineered low shear polymer injector, InjeX™, as the 1st mix-chamber which flows the partially mixed polymer/SS into the Boundary Layer Viscous Drag (BL-VD) P6 feed pump for final homogenous mixing and pumping. The BL-VD feed pump very gently “pulls” the pre-mixed slurry through the pump and thoroughly mixes the polymer and the suspended solids with the “stretched out” unbroken long polymer chain.

We have sold the unique DISCFLO Boundary Layer Viscous Drag pump for over 25 years with excellent longevity in the municipal marketplace with typical pump life spans over 20 years for thickener feed applications. The gentle, non-impingement “pull-through” pumping action of the DISCFLO pump further activates polymer by “stretching” out the long chains exposing additional sites for SS to latch onto and separate from the slurry/sludge. 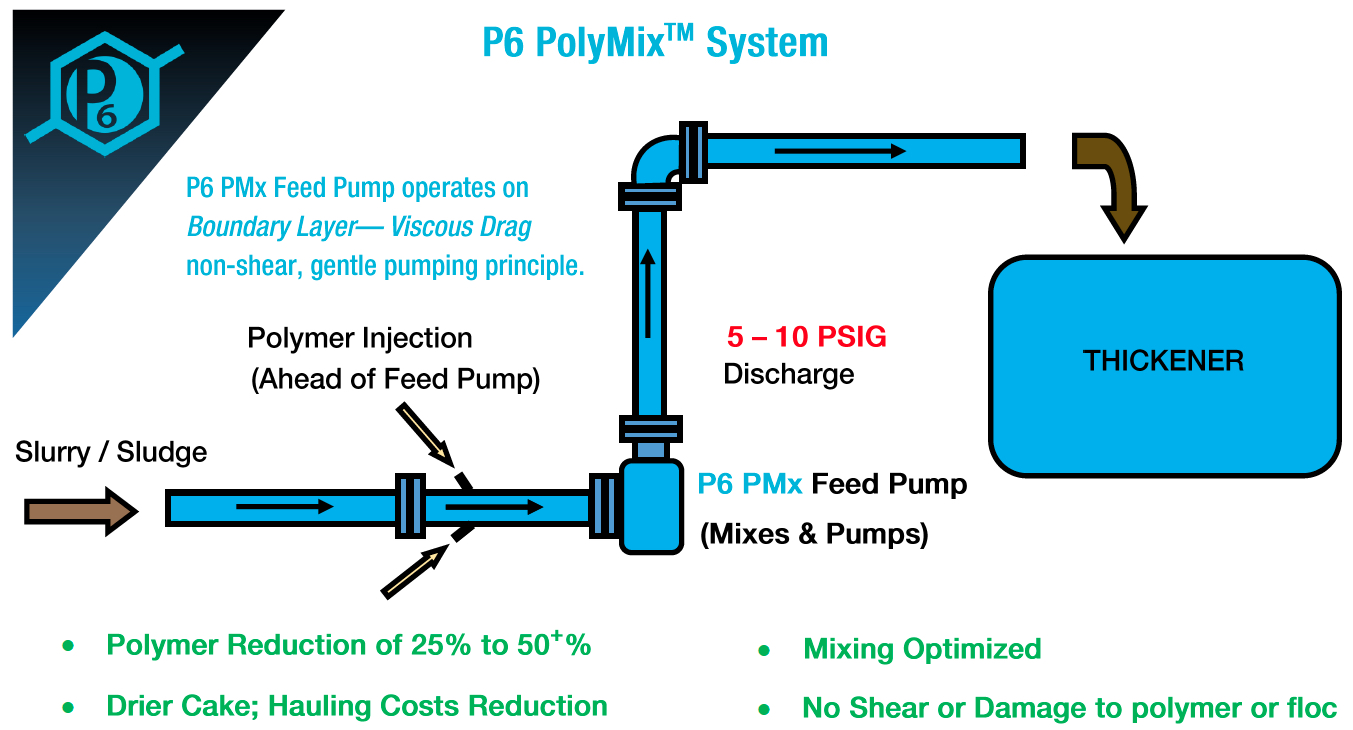